This post contains affiliate links, KidzBuyz may be compensated for purchases made through these links, for more information, click here!

Meet Dash and Dot, coding robots from the company Wonder Workshop.  We received Dash and Dot about a month ago and have really enjoyed learning about them and teaching them to do new things! My children are 4, 5 and 14, Dash and Dot have something for each of them! For those who are new to Dash and Dot, read on… If you are here for the deals, jump down to the end for savings of up to $50! 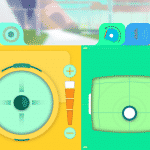 The robots come with a series of apps.  The Go App is a simple way of controlling their behaviors.  It is so easy to use that even my 4 year old daughter loves to move them around, change their appearance and make noises.  This app works for both Dash and Dot. 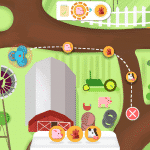 The next app (in terms of complexity) is Path.  Path is really neat because it allows kids (even non-readers) to begin to code visually using a set of challenges.  My 5 year old LOVES this app. The challenges require him to set the path that Dash will take and select in sequence a series of actions he must complete before crossing the finish line. Once he has completed the sequence, you just press a button and Dash takes off along the path set doing what he has been programmed to do along the way! It’s such a great way for younger kids to begin to understand sequencing as well as Cause and Effect. 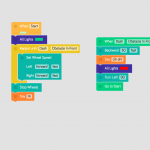 Blockly is the more advanced coding app (requires the ability to read pretty well).  This app is straight up coding in modules.  This is the app that my oldest son (14) fiddles around with.  I was pretty surprised he was interested at all given that he has outgrown “toys”.  But he really enjoys the coding aspect and it’s also kinda cool to see how excited he gets about successfully getting Dash to do what he wants him to!

So far Dash is the star of the show.  Dot does not move, so she does not have quite the same appeal.  She is touted as the brainier of the robots. I am guessing that we have just not gotten to that point yet.  So far she answers questions like a Magic 8 Ball and holds up things for Dash to knock over.  That said, she is my daughter’s favorite, I’m guessing that her more compact size is part of the reason!

Dash and Dot also have some accessories available.  First, I should mention that they come with adaptors that make them Lego or other building brick compatible.  The kids have built various contraptions, including a plow to clean up toys.  There is a xylophone that attaches to Dash.  It has it’s own app in which your child can compose music and choreograph his movements! Both of my younger kids think this is really cool.  It is a bit above my 4 year old’s head, but I was surprised by how quickly my 5 year old picked up on it, especially the movement aspect. The best accessory in my opinion is the newly released Launcher.  It allows Dash to throw balls at various targets as seen in the YouTube video below.  It’s really a lot of fun and a must-have accessory in my opinion.

So… what’s the best deal? First decide how much of a commitment you want to make.

The Essentials: You can get started and be guaranteed hours of fun with Dash and a Launcher. Wonder Workshop has a Holiday Pack for $149.99 with promo code HOLIDAY.

The Whole Deal:  Wonder Workshop is offering an $50 discount on The Wonder Pack with code HOLIDAY50, bringing it down to $2299.99. This is the lowest price to date on this set which includes everything (both Robots, Accessory Pack, Xylophone & Launcher) except the Launcher.